We will STREAM the presentation on this page on Monday, January 17th at 10 a.m. EST. The stream will begin at 9:45 a.m. with a pre-show that will highlight the MLK Symposium over the years. 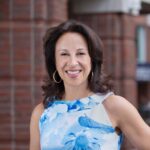 Maria de Lourdes Hinojosa Ojeda. As a reporter who was the first Latina in many newsrooms, Maria Hinojosa dreamt of a space where she could create independent, multimedia journalism that explores and gives a critical voice to the diverse American experience. She made that dream a reality in 2010 when she created Futuro Media, an independent, nonprofit newsroom based in Harlem, NYC with the mission to create multimedia content from a POC perspective. Futuro does this in the service of empowering people to navigate the complexities of an increasingly diverse and connected world.

As the Anchor and Executive Producer of the Peabody Award-winning show Latino USA, distributed by NPR, as well as Co-Host of In The Thick, the Futuro Media’s award-winning political podcast, Hinojosa has informed millions about the changing cultural and political landscape in America and abroad. Her new book, Once I Was You: A Memoir of Love and Hate in a Torn America, Hinojosa tells the story of immigration in America through her family’s experiences and decades of reporting, painting an unflinching portrait of a country in crisis. She is also a contributor to the long-running, award-winning news program CBS Sunday Morning and a frequent guest on MSNBC.

Hinojosa’s nearly 30-year career as an award-winning journalist includes reporting for PBS, CBS, WNBC, CNN, NPR, and anchoring the Emmy Award-winning talk show from WGBH Maria Hinojosa: One-on-One. She is the author of two books and has won dozens of awards, including four Emmys, the John Chancellor Award, the Studs Terkel Community Media Award, two Robert F. Kennedy Awards, the Edward R. Murrow Award from the Overseas Press Club, and the Ruben Salazar Lifetime Achievement Award from the NAHJ. She has been honored with her own day in October by New York City Mayor Bill De Blasio and has been recognized by People En Español as one of the 25 most powerful Latina women. Additionally, Hinojosa was the first Latina to anchor a PBS FRONTLINE report: “Lost in Detention” which aired in October 2011 and was the first to explore abuse at immigrant detention facilities, garnering attention from Capitol Hill as well as both the mainstream and Spanish-language media.

As a reporter for NPR, Hinojosa was among the first to report on youth violence in urban communities on a national scale. During her eight years as CNN’s urban affairs correspondent, Hinojosa often took viewers into communities rarely shown on television and continued that work long-form on Now on PBS. At Futuro Media, Hinojosa continues to bring attention to experiences and points of view that are often overlooked or underreported in mainstream media, all while mentoring the next generation of diverse journalists to delve into authentic and nuanced stories. In 2018 she was a Fellow at Shorenstein Center at the Harvard Kennedy School and is a frequent speaker across the country. In 2019, she was named the inaugural Distinguished Journalist in Residence at her Alma Mater, Barnard College. She lives in New York City with her husband and two children. 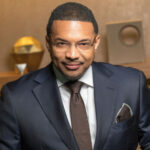 Dr. Rashad Richey is a university professor, lecturer, Emmy nominated broadcaster, and political/social analyst.  Nationally, Dr. Richey is the television news anchor for ‘Indisputable with Dr. Rashad Richey’, which airs on multiple cable outlets with viewership averaging 1.3 million daily. Dr. Richey is routinely featured for his political analysis and commentary on MSNBC, BBC America, Black News Channel, Fox News, CNBC, CBS News, and other networks. Prior to becoming the President of Rolling Out Magazine in 2021, he served as Chief Editor-At-Large and Sr. Writer.  Rolling Out is the largest free-print urban publication in America with 2.8 million readers monthly and a combined social media following of over 500,000.

Dr. Richey is also the host of the award-winning Rashad Richey Morning Show on News & Talk 1380-WAOK and Political Commentator for V-103 FM, the nations’ largest urban station. Dr. Richey is the first African-American talk radio personality to be voted “Best Talk Radio Host” by readers of Atlanta Magazine and the Atlanta Journal-Constitution.

Believing service is what connects humanity, Dr. Richey serves on the Board of Directors for Piedmont Atlanta Hospital, and Children’s Rights -a policy and legal advocacy organization dedicated to the rights of children, and was awarded the Presidential Lifetime Achievement Award by President Barack Obama for his philanthropic endeavors. 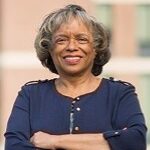 Dr. Patricia Coleman-Burns is a University of Michigan Assistant Professor Emerita of Nursing and affiliated faculty in the Department of Afro-American and African Studies.  PCB began her career in the 70s studying Black & Black Women’s social movements.  Appointed by former Dean of the UM School of Nursing Rhetaugh Dumas in 1991 as director of the Office of Minority Affairs; she immediately pioneered the trend to rename all such entities “Office of Multicultural Affairs”.  Her scholarship focuses on intersecting identities across safe policing, social justice, health equity, social determinants of health, and health promotion and disease prevention.  Her research and science center on community impact and access of citizens to evidence-based knowledge and skills. She conducts workshops on anti-racism and anti-Blackness narratives; “hidden unconscious and/or implicit biases”; microaggressions across intra-personal, interpersonal, institutional and cultural domains; and “bystander (accomplices & co-conspirator) intervention”.

Sponsored by the University of Michigan Annual Reverend Dr. Martin Luther King Jr. Symposium; the Office of Academic Multicultural Initiatives, a unit in the Office of Diversity, Equity and Inclusion; and the Stephen M. Ross School of Business with support from the William K. McInally Memorial Lecture Fund; and Institute for Humanities from the Jill S. Harris Memorial Lecture Fund.

© 2022 The Regents of the University of Michigan